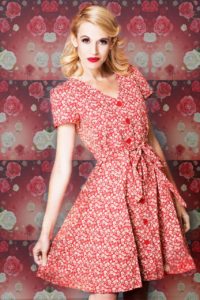 I was was born and raised in Melbourne, Australia. I’m a dual citizen of Australia and the US and live in Los Angeles.

Growing up in the 80’s, I was raised on slasher movies from the 70’s and 80’s by Dario Argento, Stephen King, Wes Craven, John Carpenter, and Sam Raimi, to name a few. However, that soon expanded into other genres such as comedy and drama, especially films by John Hughes.

I began my career as a model and studied acting at The Lee Strasberg Theatre Institute in LA. After joining a theatre company in LA, I got my taste for writing, when the female members of the company were asked to write and perform their own sketches. I fell in love with the whole writing process, and it inspired me to create my very first project, a sketch comedy web series called Vegan 101, which I wrote, produced, directed, and performed in. It became a multi award-winning series and starred Oscar-nominated actor, Eric Roberts in Season 2, with music by Keaton Simons.

With a successful web series behind me, I was eager to move on to bigger things, by learning to write for Film and TV. I studied Writing for Comedy and Writing for Television at RMIT (Royal Melbourne Institute of Technology) and undertook screenwriting programs in LA.

In 2015, I founded Sweetest Pit Bull Productions which focuses on comedy, thriller and horror films for women 40 +

Are you a Producer or Director? Contact me here.